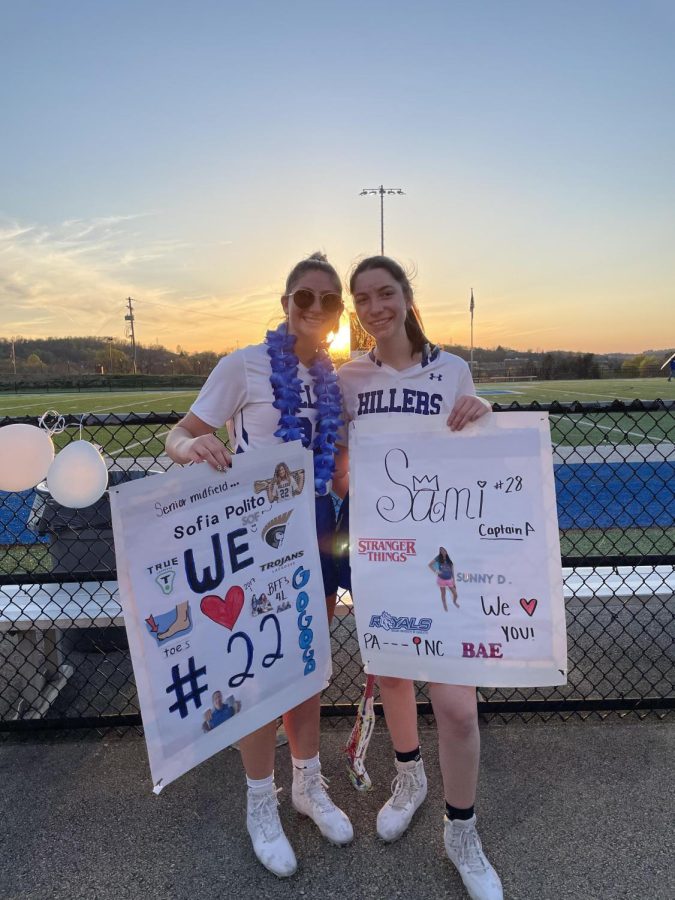 Polito (left) and Dames (right) pictured above holding their senior night posters from lacrosse this year. Polito and Dames have built a lasting friendship through the sport and have grown up together on and off the field.

Polito was inspired to play when her brother played in elementary school.  This put a spark in Polito’s eyes for this sport, which she joined in sixth grade as soon as she possibly could.

Lacrosse has become a huge part of Polito’s life: she plays for her club team, True Lacrosse, in Pittsburgh, in addition to the Trinity women’s lacrosse team.

The amount of love she has for lacrosse keeps this sport on her mind every second: “Lacrosse has become just about the biggest part of my life. I’m literally always thinking about it.”

Polito, like most athletes, has considered quitting. Every athlete has struggled with issues, but, for Polito, the hardest part was juggling everything. Polito wanted to keep her social life, but she had to do it while she focused on school and lacrosse.  Polito has continued to play because she just can’t imagine living a life without lacrosse.

Polito had over 10 offers for lacrosse alone, some of those including Youngstown State University, Ohio State, University of Pittsburgh, Seton Hill University and the University of California Davis. She chose Anderson because it gave her more options athletically and academically.  When she committed to Anderson, she was scared other people would hold her against higher playing expectations, but her best friend, and teammate, Sami Dames was so proud of her when she decided to commit to Anderson.

“I’ve loved playing lacrosse with her since we joined in 6th grade, and we’ve come so far together,” said Dames.

Polito had many conflicted feelings about committing: “I was really excited and extremely nervous. I was scared at first to go back to lacrosse and thought everyone would have higher expectations I couldn’t reach [After committing to Anderson].”

The best part about lacrosse for Polito is helping new people on the team, but another vital part for her is building her lacrosse IQ and knowing what’s happening in the game. Trinity Women’s Lacrosse Coach Jerry Frazee added that Polito’s biggest strength in lacrosse is game knowledge.

Dames described Polito as a teammate as very energetic and bubbly; Coach Frazee added on describing Polito as an overall great player and just a joy to be around. Coach Frazee said it was a great pleasure to coach her and wishes her well in her lacrosse career and that he is extremely excited to watch her grow and compete in college.

Polito shared her favorite memory from her club team, which was when she had toe surgery.

She complained about her feet aching and got the nickname of ‘toes,’ which continued with her through some college visits because her club coaches referred to her as ‘toes’ while talking to colleges.

Polito also shares her favorite memory from the Trinity team, which was when she was picked to demonstrate a drill and fell on her face. Polito wants to thank her club coaches as well as her school coach, past and present teammates that helped her become who she is today.